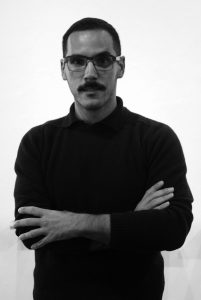 My artistic practice is defined by an engaged dialogue with the social goings-on of the contemporary times. Particularly the exploration and observation of phenomena that elicit strong emotional states such as anxiety, the experience of discomfort, and fear. I am interested in how social crises are situated in the structure of everyday life as well as the perception of specific social patterns and systems of behaviour.

My artistic practice is permeated with various neo-avant-garde traditions. It is bound to conceptualist legacy as an epochal attempt of a mental development of an art project. This commitment is formally shown in a number of diverse media from the sculpture, drawing, collage, photography, to the object. It stretches over a wide range – from social sculpture, to and among various re-articulations of object trouvée, however, not within the ready-made tradition, but rather as a very spatial ‘quote’. A very prominent position among them occupies spatial installation – representing expansion and a concurrent condensation of my formal sculptural qualification.

In the range of my interest and in my creation I have been pursuing investigation of pattern and ornament for several years – at the level of the form as well as of the content. I have employed and have been exploiting both, the pattern and the ornament, on the surface of the form that I work on. I complement and enrich different materials with various ornaments representing either a mere artistic (formal) addition or the content, conveying the topic of the exploited project. The content is generally realized in the medium of the installation. I understand the installation as a complex organism whose life energy I draw on the emotional engagement that often results in the content of social topics; which remain one of the focal points of my interest.

With my artistic practice I wish to present my art projects to the public like a dissection of different levels of consciousness, reality and experience, while thinking big and formally not focusing only on the sculptural medium, but instead constructing my works in layers and in harmony with various levels – at the level of form and of content.

Boris Beja (1986) first graduated in 2009 from the Faculty of Natural Sciences and Engineering from Graphic Communications, University of Ljubljana and then graduated again in 2013 from Sculpture at the Academy of Fine Arts, Uni – versity of Ljubljana. He has had a number of individual exhibitions and has collaborated on several group ones. He has received some awards, among them the 2012 Prešeren Student Award for sculpture and, in the same year, the highest award for a contribution to the sustainable development of our society, the Slovene Human Resources Devel – opment and Scholarship Fund. Beja is also a critic and a curator. In his work, he unites various visual practices into an aestheticised, direct address with an emphasis on social criticism. From 2010 to 2013, he was writing articles on the subject of culture for the web portal Planet Siol.si. He was nominated for the OHO Group Award in 2015 and 2016. He has presented himself in many solo and group exhibitions. From the begining of 2014 until autumn 2017 he worked at Škuc Gallery as assistant of artistic director of Škuc Gallery. He lieves and work in Ljubljana.