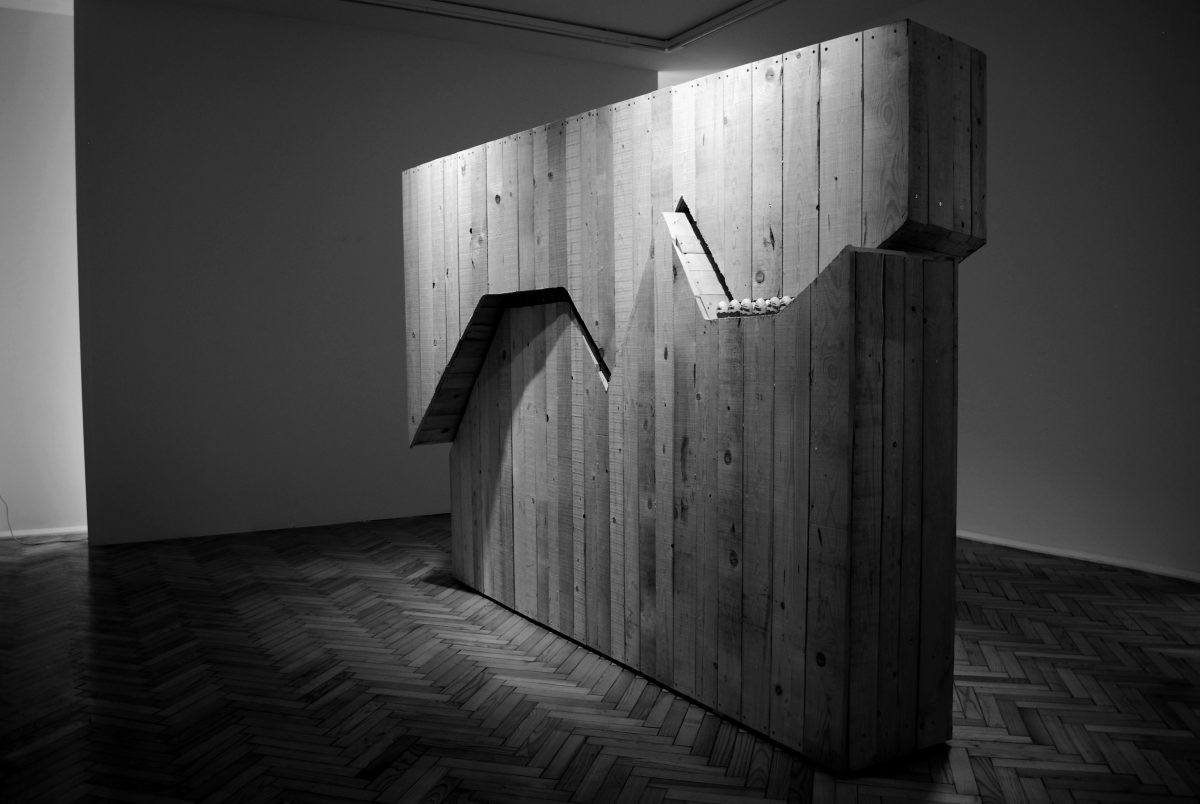 The work On the border: @heartbreak originates from a reflexion on the border that divided the region of Carinthia between the Republic of Austria and the Kingdom of SHS, thus interlacing geographical facts, such as the drawing of border lines onto the landscape, personal memories and projections of the neighbouring country, as well as a deliberation on the broader social consequences of the political arrangement of borders. The spatial installation consists of a wooden construction that is divided by a borderline, inspired by the actual drawing of the land border in the micro-location where the church of St. Urban above Zgornji Kozji vrh in the municipality of Dravograd is still standing today. The border, which was established in 1920 and was supposed to divide the church in two parts, was incorporated in the Slovenian part – according to historical testimonies, this happened after a self-initiated vote by the surrounding population and in line with an agreement between the owners of the land. At first sight, the drawing of the border is reminiscent of a heartbeat dividing the wooden construction into two parts; the upper part is supported by “KinderEggs”, symbolically numbering 100 for the 100th anniversary of the Carinthian plebiscite. The musical background, the Carinthian folk song “N’mau čez izaro”, which is performed polyphonically by the author, envelops the space in a glum melody. These intertwined elements offer the visitor an integrated experience and encourage them to think about the significance of borders – the Carinthian border that has separated families, friends and neighbours, but also the border as a universal socio-political fact, which shapes and influences the destiny of many. Andreja Hribernik

The project was made in collaboration with the Museum of Modern and Contemporary Art Koroška.

The project began with the invitation from Director Andreja Hribernik when we went together to the border in Carinthia, to the Church of St. Urban, where we were supposed to prepare a project to mark the centennial of the Carinthian Plebiscite on the invitation of the Austrian side. I was invited to prepare a spatial intervention into that space. In that space, we encountered some incredibly interesting things and, on my way back to Ljubljana, I already began contemplating how I thought about the border, how I thought about Carinthia and in what way the border area had impacted me as a child.

My aunt came from or went shopping to Carinthia and, in addition to strawberry jam, Kinder eggs were considered big presents at the end of the 1980s. That is why I decided to mark the centennial by making a hundred Kinder eggs, which I modelled in the spring and began preparing as documentation of the initial project for the exhibition Borderlines in Slovenj Gradec. That also made us think about the border. Because the world had stopped due to the local and global situation, my father and I decided to erect a wooden object and trace in it the border where we discussed the project on the centennial of the plebiscite, which we actually transferred with the moment of surprise – the line that traces the border between Austria and Slovenia. The mass or wooden construction rests on Kinder eggs, which in a way are also a visual surprise for the visitors of the gallery.

The project is accompanied by music. A large part of my practice has been directed towards music. I introduce or include music in my visual spatial installations and, for this project, I decided to use the Slovenian Carinthian folk song Mau čez izaro (Across the Lake). In the studio, I recorded a four-part version of it, where I as a subject become a quartet and sing a four-part version of the folk song. The song is a lament of sorts. We are used to hearing it in funeral processions, but, in this case, across the border and near the border, the song points to the heartbreak of some people remaining on the other side of the border, the other side of the line, so that sentimentality is actually also represented in the folk song itself.

Just as I hope that the project near the border at St. Urban continues, the curator Andreja and I decided to further develop the project through its documentation, such as this video we are making today. In the autumn, we will take the object to the place where we will burn the sculpture. Thus, what was taken away from the inhabitants of Slovenj Gradec on Labour Day will be given to them once again. In Slovenj Gradec, we will have an artistic sculptural bonfire. Actually, a new dimension will emerge, strengthening the very melody of this passing and in a way also of the celebration of homeland and that which lies beyond the lake, across the border. 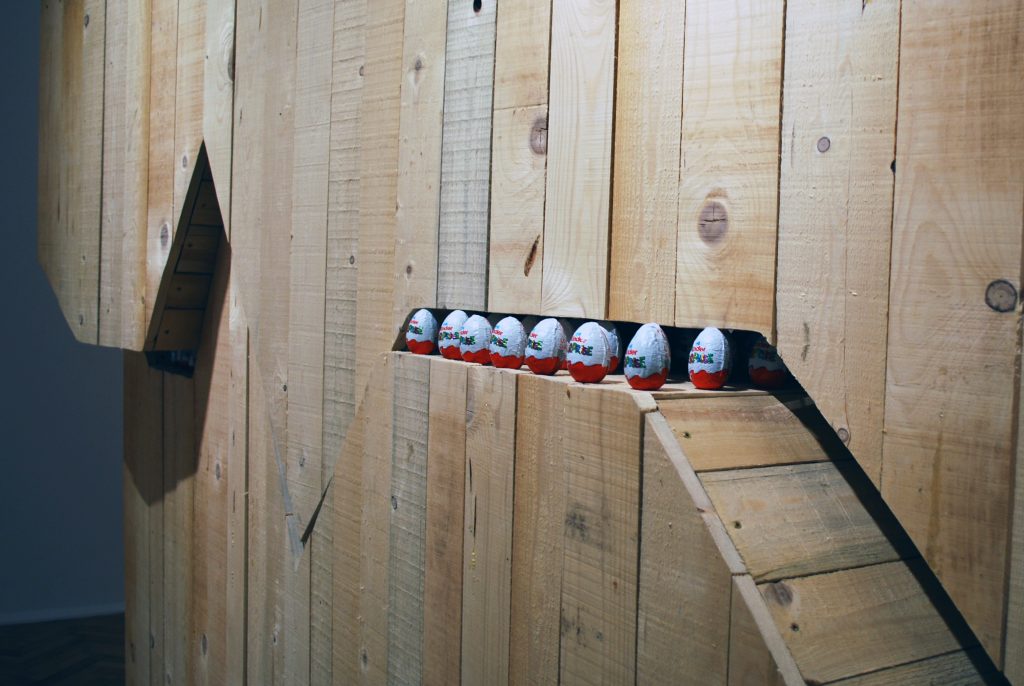 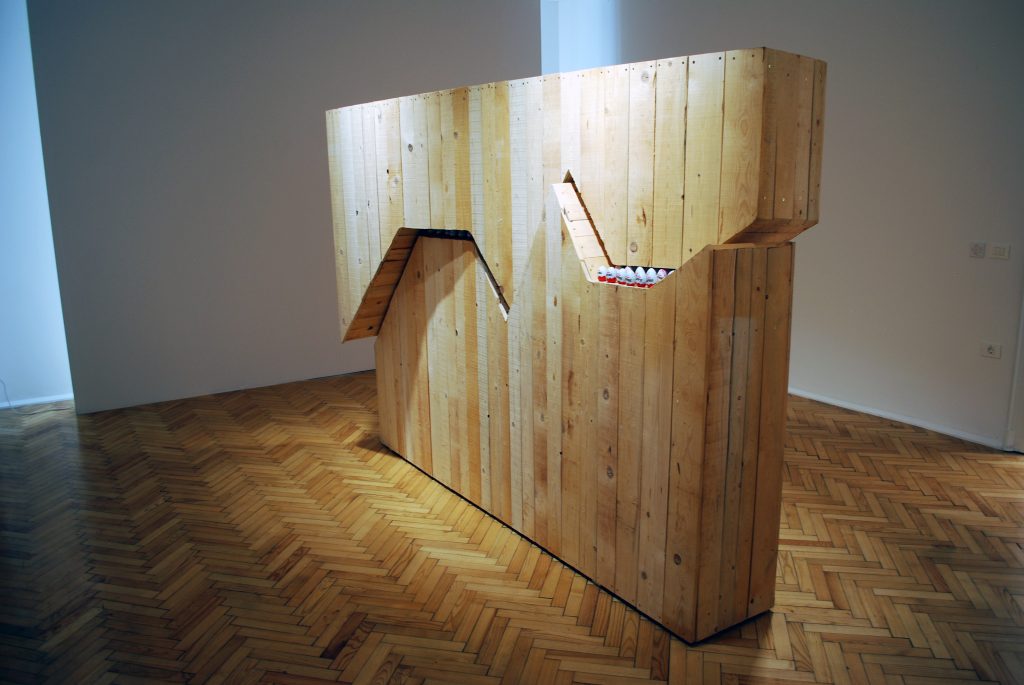 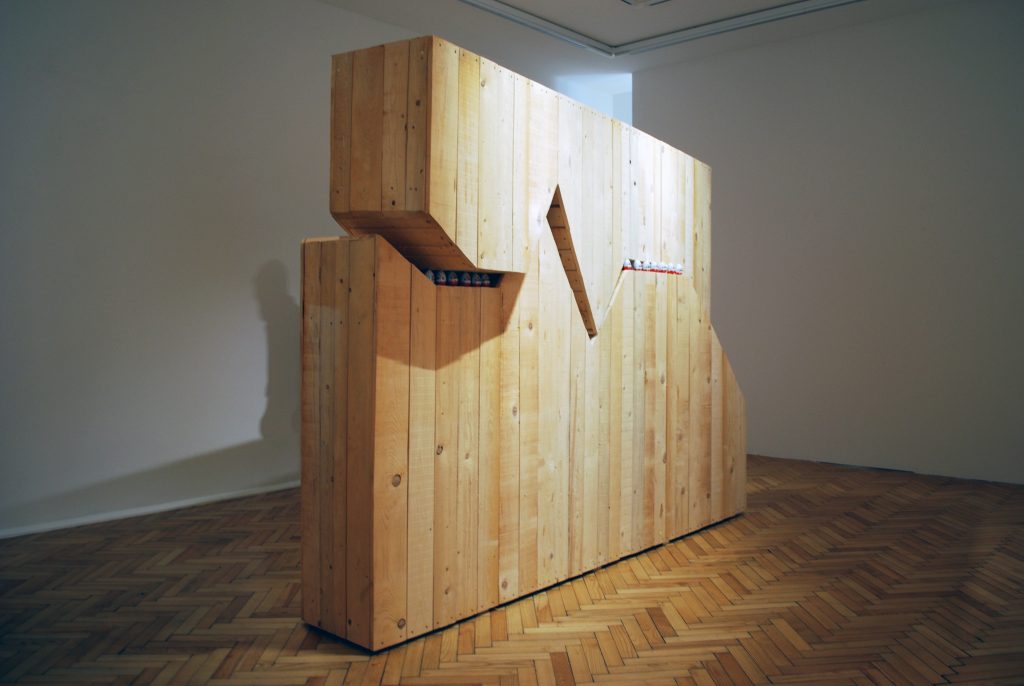 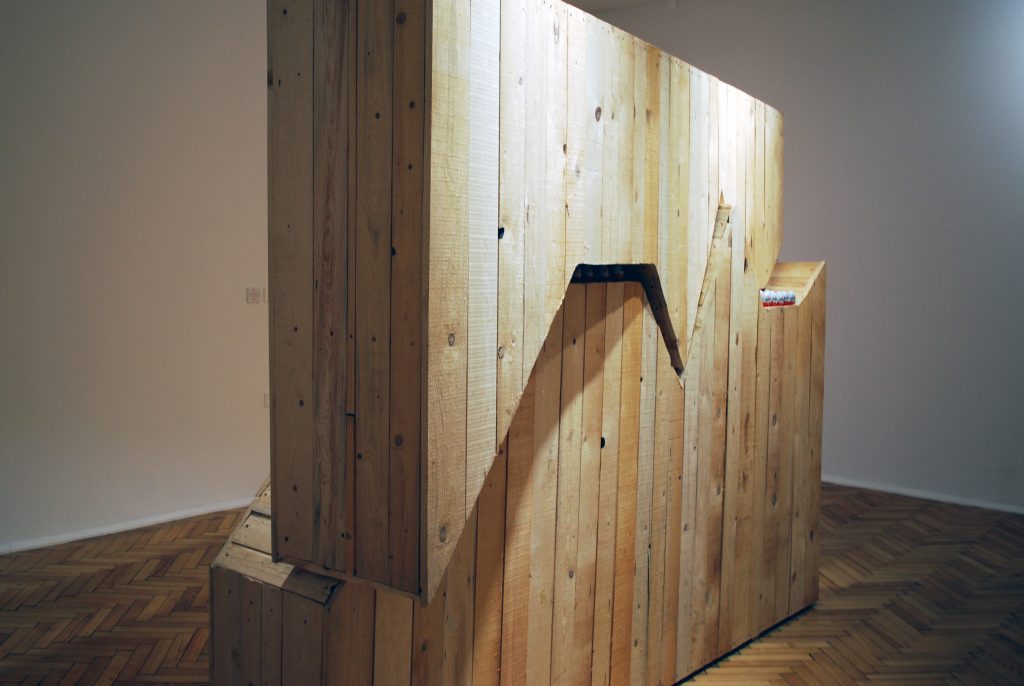