The project “Die Grüne” is a visually diversified ambient installation combining photography, ready-made, drawing, and objects. As such, it sheds light on the artist’s practice, which is at once characterised by a masterful play with different media and a confrontation of opposing content layers.

The installation likewise offers an insight into Boris Beja’s authorial research on the recent history in the territory of former Yugoslavia. The project crucially draws on the artist’s visit to a remote village in the Croatian region of Zagorje where Josip Broz Tito was born. By investigating the interior of the building that once housed the Political School in Kumrovec, the installation alludes to the economic and socio-political changes in the area, which transitioned from the socialist to capitalist reality, while the title itself points to the possibility of reading through the illusion of beautiful and good.

The building of the Political School was constructed in 1981 to serve as an education centre for the personnel of Yugoslavia’s League of Communists. After its dissolution in 1990, the building was taken over first by the Ministry of Internal Affairs and then the Ministry of Defence of the Republic of Croatia. After accommodating refugees at the end of 1991, the building was abandoned and left to decay. However, the artist’s enquiry into the role that time has played in this process is not concerned with the ravage it has caused, but rather with what it has brought forth. To put it differently, time has engendered life by letting nature reclaim the building’s interior. The said process is reflected in the photographic segment of the installation, which represents a photo-documentary mapping of space, the herbarium containing plants from the above-mentioned building, and potted indoor plants.

The absence of human factor has thus materialised through the visible and tangible presence of vegetation, with the sound component embodied in the rhythmic humming of the video projector. The latter, rather than projecting an image merely casts light on the wall to enframe the drawing of the former sports hall in the building. By employing the old technology as well as the notion of the collective conveyed by the above-mentioned drawing, the artist may be said to have transformed Tito himself, a film aficionado, into a sensory perception of sorts. The drawing, however, is rather equivocal: albeit underlined by the absence of individualism and obedience to rules, it is still incorporated into the installation as a whole – which is subjected to inverted rules. Just as the asphalt sports hall and the building are paradoxically reclaimed by vegetation, so too the artist allows nature to take over the closed exhibition space.

Production: Museum and Galleries of Ljubljana – Exhibition curator: Alenka Trebušak – Design: Ajdin Bašić – Realisation of the exibition: Technical Service MGML The exhibition was made possible by: City of Ljubljana 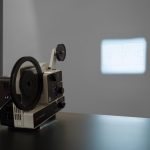 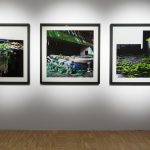